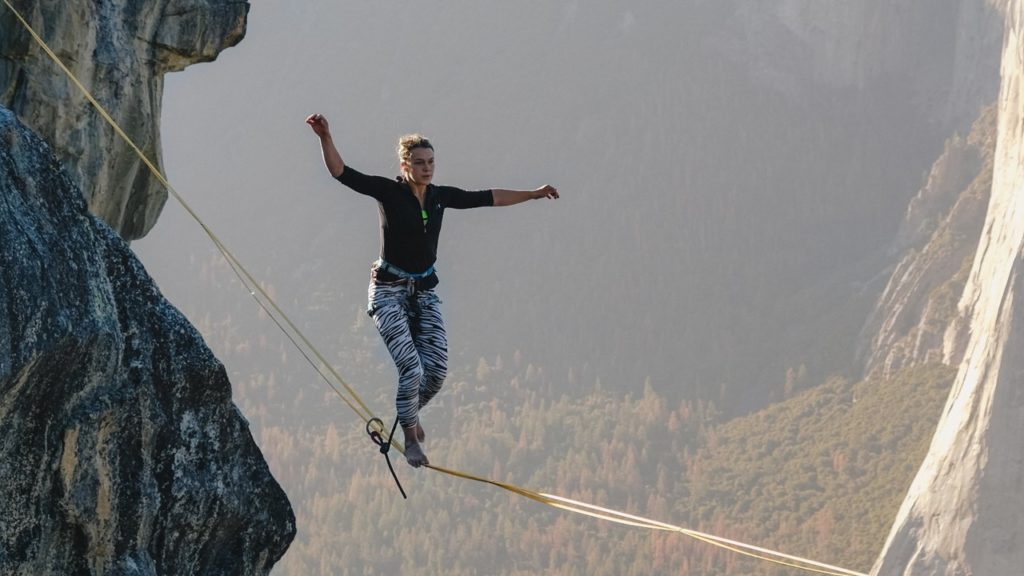 The Tightrope of Self-Compassion

For 14 years, ‘that’ week of the month has been a mixed blessing for me: arriving regularly, month after month, but heralded by 24 hours of pain and vomiting about 12 hours in. It’s not a great fit with working life. The pain is incapacitating and renders my usual daily routine impossible. Some months are okay, others aren’t. It’s like Russian roulette, except that there’s blood either way; win or lose.

Over the years I’ve learned what makes it better and what makes it worse. Taking a bath eliminates all symptoms, with the slight disadvantage that osmosis limits how long I can remain submerged. A hot water bottle at the base of the spine is good for relaxing the muscles and eases the pain significantly.  To lie in bed, in silence and complete relaxation, drifting in and out of sleep also does the trick. Rushing anywhere is a recipe for disaster and can reduce me to a vomiting mess within an hour. Using any muscles to hold myself upright, whether standing or sitting, can do the same.

Around three years ago, on day one of menstruation, and having just started a new job, I was resisting a strong urge to take the afternoon off sick to go and rest. I had taken painkillers and was sitting at my desk with a small cushion supporting my back, but I was still in a cold sweat, beginning to shiver and worried that I was going to pass out. Eventually, I had to submit to my body and leave the office. The journey home, changing from train to bus, followed by a ten minute walk, was punishing. I collapsed into bed with a hot water bottle as soon as I got through the door. The shivering stopped, the pain eased and I fell asleep. I woke up from a deep and delicious slumber two hours later. I had a relaxed evening and an early night and was well enough to go to work the next day. I had traded four hours of company time for my own well-being. Was that so bad? Why did I resist it so much? My body was asking for a few hours’ rest in order to manage the task at hand. It doesn’t seem unreasonable at all.

I vowed to go forward with more respect for my body, to honour her requests, but the balancing act wasn’t easy. On the tightrope of self-compassion it felt like everything around me was designed to throw me off balance. Two years later, following a complete disaster with a highly anticipated and high-profile pre-sale at work, I experienced the most stressful week of my life so far. It also happened to be menstruation week. It was all hands on deck in the office. Everybody was working extremely long hours and pulling extremely late nights. To my astonishment, our business intelligence engineer stayed awake for just shy of three days straight. At the first sign of period cramps I dosed up with painkillers and battled on. My instincts told me it was wrong, but stopping didn’t feel like an option. Somewhere deep within me a voice reminded me that I was far out of balance, that I was doing myself a disservice, but the adrenaline roared louder. As the painkillers wore off, the pain began to return. My womb was screaming at me. As I carried on, sleep-deprived and tense with anxiety, my womb wasn’t the only part of my body that was suffering abuse.

Again, I was prioritising my work over my wellbeing, and again, I had to ask myself: why? Was my lack of self-worth so great that I believed I deserved to suffer? Was it fear of judgement, fear that I’d be seen as a slacker if I chose to rest and get well when nobody else seemed to have that need? Was I so passionate about this company’s work and the customers waiting for an answer that I’d give all I have, even when it was damaging to my health?

The next morning I got a seat on the train. Among thousands of other silent commuters, I had forty minutes of journey time to myself. In the relative stillness the womb immediately came to mind. I reflected on this miraculous organ, present in my body. The space through which human souls can travel from the unseen into this existence. The space that can hold a beating human heart. The space that every human alive grew in; our first experience of this life. What a miracle, what a sacred blessing, and what a great injustice I had shown mine. Like the rest of my body, this womb did not belong to me. This womb and this body were precious loans that could cease to function at any time, and I had not shown them gratitude. What justifiable reason could I give to ignore their cries?

That week yanked me off the tightrope of balanced living, and it was quite a fall. To restore a sense of balance to my life felt like an impossible achievement. Societies are imbalanced, organisations and communities are imbalanced, families and couples are imbalanced. Striving for the elusive work/life balance, I couldn’t even maintain a balanced diet. What hope did the rest of the ‘life’ portion have? What hope did I, as an individual, have? I didn’t exist in a bubble. I couldn’t be separated from my surroundings. Except that, at a surface level, I could.

While all surroundings have an effect on us, pulling us in one direction or another, not all environments affect us in the same way. I’ve mentioned already that my period pains rendered my daily routine impossible, but what if it wasn’t the menstruation that was the problem, but the daily routine? What if it doesn’t suit the cyclical, female nature to function in the same linear pattern day in, day out? The conclusion I reached, lying on the sandy circus floor below that tightrope wire, was that ultimately, it’s easier to choose the environments I put myself in than it is to fight the body I was born into. In the battle of My Womb v. The Company, my womb eventually won. I made the decision to leave my job, and to remove myself from an environment that encouraged me to disregard all that I hold sacred.

Though it has felt terrifying to step outside of the comfort and security of a ‘normal’ and predictable working life, when I focus on the future and the life I’m trying to build, the fear transforms into hope and exhilaration, and though 100% balance can still seem hopelessly unattainable, I remind myself that 50% balanced is a hell of a lot better than 10% balanced and from 50% balanced 51% doesn’t seem so far away, then 52% and so on…

We live in an unbalanced world, yes, but I’m certain another way is possible. I imagine a world where rest and play are balanced with honest work and striving; where time spent in cities, among people, is balanced with time spent in isolation, among trees; where stress is reserved for life-threatening situations or severe trauma, and where menstruating women spend a day or two in bed. I wish I could hand out directions to this utopia, but I don’t know the way. I will say this though Future Females, I think together we could build it here, 1% at a time. What do you say?

Rahma is a freelance writer, who recently moved from corporate to shape up her own venture! She is passionate about personal development, storytelling, women’s empowerment and hiking.